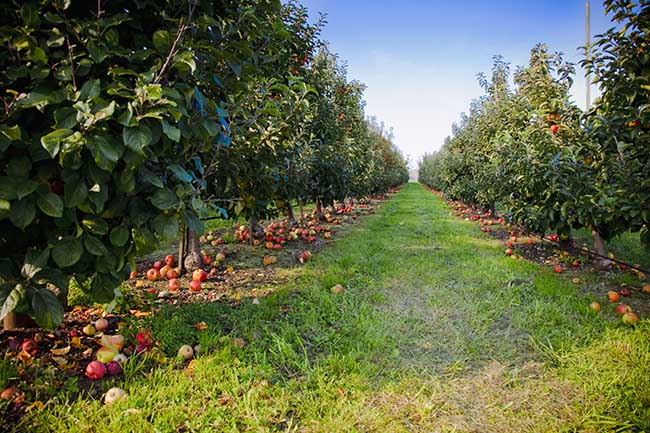 The apple fruit grows best in temperate areas of the winter weather. You need a good water source, fertilizers, sunny days, and cool nights for maximum apple production. One such area in the United States known for apples is Washington State.

From 1997 to 2001, average apple production in the state averaged 120 million bushels. The 2004 USDA Organic Survey ranks Washington as a top producer of organic apples. But what types of apples can you find there?

Join me below as I discuss the different types of apple fruits grown in Washington State.

This is a modern variety of apple types and a multi-purpose one. It’s a medium to large apple with an oval shape.

The apple is a good source of vitamins A and C. It can be used for both raw and cooked applications. You can slice it when raw and add it to salads.

Cameo is a bright and red-striped apple type with a creamy orange color. It’s a common type of apple in Washington with a firm and crisp texture.

The taste is sweet, and one with very thin skin. This makes it taste quite fresh with a hint of a pear.

Fuji is a big reddish-pink apple variety and one of the wide apple varieties in the US. It is a versatile apple variety with a wide range of applications. The apple is quite flavorful, offering a sweet-tart taste.

The Fuji variety is readily available from the months of January to August. You can also expect it during the months of October to December.

The Gala features a yellow background color with pinkish-orange stripes. It also has a sweet-tart taste and is a great choice for multiple applications. The texture is crisp but not hard.

It originated from New Zealand in1930s, and like most apples, the Gala is clonally propagated. It’s available from January to June and from September to October.

The Ginger gold apple ranks as the 15th most popular apple variety in the United States. It’s a yellow apple variety that grows early in the season. You’re likely to see it first in the market.

This is one of the best apple types that can last in the fridge for days without going bad. It’s slow to oxidize, making it retain its freshness for a long. This makes it a suitable choice for salads, pies, and crisps. It’s also a great one for kids to snack on.

Golden Delicious is among the favorite apple types in the US. It’s a delicate type of apple with smooth yellow color. The apple is available all year and produces a sweet taste.

This is an all-purpose apple type to us with salads, sauces, eating, baking, and much more. This apple type is readily available from September to June. It’s one of the most delicious apples because of its natural sweetness.

The Granny Smith apple is a crisp green apple and a suitable choice for multiple applications. It is highly recommended for pies. The apple is also referred to as the green apple or the sour apple.

Granny Smith originated from Australia in 1868 and was named after Maria Ann Smith. It’s rich in Vitamin C and a great one to help boost the immune system.

This is a cross between a Golden Delicious and a Jonathan apple type. It is a relatively new type appearing in New York State in 1953.

It’s one of the largest apple types with a tangy taste.

Pink Lady is a trademark name with the apple known as Cripps Pink. It features an attractive pinkish blush color hence the name. The apple is quite delicious, tasting more like the Golden type.

The Rome apple type originates from Rome and is one of the best for cooking applications. It features a floral aroma and a tangy taste.

This is one apple variety that is available all year. It features a bright red exterior and a heart shape. The apple is flavorful with a sweet taste making it ideal for fresh preparations.

You can also add it to salads and fruits, and greens. The apple was first discovered in 1870 in Madison County, Iowa.

There you go! These are the different types of apples grown in Washington. You can expect to find the most varieties in the region. All the US top apple varieties like the Red Delicious, Gala, Fuji, Golden Delicious, and many more can be found in the state.

There are also over 100 packaging stores that sort, pack and ship the different apple varieties across the 12 months. Over 60% of the freshly consumed apples in the United States are grown in Washington. That just goes to show the big contribution of Washington State to apple production.